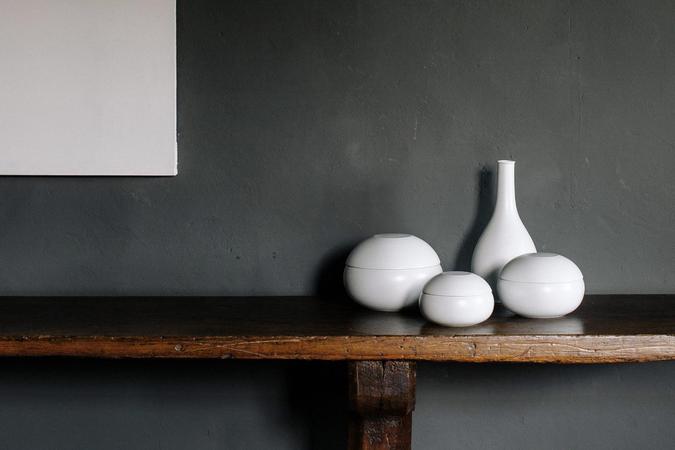 EVERYTHING THAT IN ITS ORIGINAL STATE HAS BEEN TRANSFORMED BY TIME, THE GREATEST SCULPTOR OF ALL. According to Axel Vervoordt, revered Belgian designer and antique collector, decoration is about more than just decorating. “My taste is dominated by a sense of proportion. I want to achieve a feeling of harmony between architecture, furnishings, works of art, and antiques.” His organic approach, characterised by a commitment to fusing objects with their surroundings, respecting existing environments, and acknowledging the passage of time, has cemented Vervoordt’s place in the firmament of design pioneers. He began working as an art and antiques dealer in the late 1960s, and one of his earliest projects was the painstaking restoration of 16 Renaissance houses in the Vlaeykensgang in Antwerp. A portion of this space was transformed into his home, and also the place from where he sold his treasures. He and his wife May travelled to antiques fairs across the world, first investing in collectables, and then expanding their shared passion into an interior and furniture design business, fuelled by a belief that each room has its own intrinsic character. Demand for their sofas and club chairs quickly mushroomed, and these items have remained staples of the Axel Verwoordt Home Collection ever since. His most iconic work remains residential, with a portfolio including Robert de Niro’s Tribeca penthouse, and the homes of rockstars and royalty. Despite an appreciation for beauty going back to his childhood, Vervoordt is adamant that his work isn’t rooted in aestheticism, but rather in a more traditional search for simplicity, inspiration, and humility. “At the end of the day, the people living in the house must be able to find more of themselves than of my intervention there. The role of that intervention is to be a permanent source of inspiration for the future.” Verwoordt was drawn to eastern philosophical traditions at a very young age. The inspiration he tapped into on his travels in Asia has stayed with him to this day, and is evident in much of his work. Respect for nature, the art of simplicity and harmony, the beauty found in humble objects, and the power of silence have woven their way into his designs, as has his personal interpretation of wabi, an enlightened Japanese philosophy that values the beauty of imperfection, and the simplicity of things in their most natural state. As a result, intriguing contrasts between Asian and European styles, archaeology, and contemporary art are forged. “I’m inspired by art from all genres,” he says, “from all parts of the world and from all sorts of periods. I like everything that is honest and real. Arte povera, for instance, the unsophisticated art of shepherds and monks from the mountains, was born from a great respect for nature. They were already making the most beautiful minimalistic objects hundreds of years ago. At the other end of the spectrum, the extreme sophistication of baroque might be chosen for effect, craftsmanship, or exuberance – but never to simply display riches.” One of Vervoordt’s most significant works is the Kanaal Project in Antwerp, inspired by a desire to create an authentic cultural and residential island amid a wealth of art and nature. This former distillery and malting complex is being developed to be ‘a city in the country’, featuring apartments, lofts, and shops, as well as a home for the museum of the Axel & May Vervoordt Foundation. The original character of the historical site is being brought back to life in a striking example of Vervoordt’s acknowledgment of time. “The 20th century was synonymous with production, consumption, and disposal,” he says, “but now we are running low, both on places to dump waste and on forests to raid. In the 21st century, recuperation is playing a major role. In this way, the old becomes current again. We appreciate old walls, furniture that has not been restored, everything that in its original state has been transformed by time, the greatest sculptor of all. Time gives these materials a second skin. It’s a gesture of love, a product of nature as transformed by human beings and the cosmos, which, over the years, has come to accept and integrate new forms. We must accept what nature and time have wrought.”